Toyin Abraham, BNXN and other top Nigerian celebs who changed their names

Kizz Daniel, Toyin Abraham, BNXN and 7 Other Nigerian Celebrities Who Changed Their Names, In these types of situations, a number of factors usually influences the name change and fans are not always open to the new identification. 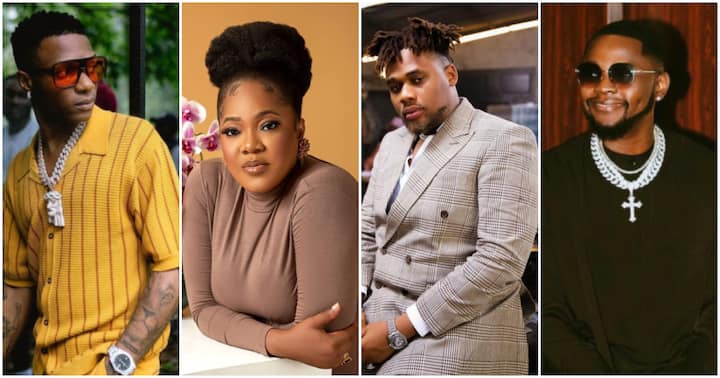 Sometimes, these fans still refer to the celebrities by the names they became known with, ignoring the new one.

Despite this, a number of Nigerian celebrities have given rebranding a chance and changed the names they used to go by for new ones.

Today,We will be looking at some of the Nigerian celebrities who fall under this category and what influenced their name change.

This much loved Nollywood actress was known as Aimakhu for many years before she decided to change her surname to Abraham in December 2016.

This seemed to signify a rebirth for the actress who had been involved in a lot of scandalous relationships that made her get dragged on social media. One of which was her relationship with filmmaker, Seun Egbegbe, who was arrested for stealing phones at Computer Village in Lagos.

One half of the PSquare music duo, Peter Okoye, started to identify as Mr P after he parted ways with his twin brother, Paul, after many years of them being known as PSquare. A rebranding was necessary for them to pursue their solo music careers.

The second half of the PSquare music duo, Paul Okoye, also started to be known as King Rudy after him and his twin brother fell out and started to sing as solo artistes.

This legendary musician was known as 2Face for the longest time since his days with Kennis Music. However, as time went on, he started to be known as 2Baba.

This talented singer used to be identified as Kiss Daniel until he fell out with his former record label, G-Worldwide, who laid claims to his stage name. This was a tough one for the singer to let go of seeing as people already knew him as Kiss Daniel.

Thankfully, he was able to change his stage name to Kizz Daniel, making sure that fans weren’t confused by his new identification.

Top Nigerian music star, Wizkid, gradually started to identify himself as Big Wiz on social media. Interestingly, this hasn’t in any way affected his breakout name seeing as fans call him both Wizkid and Big Wiz as they please.

This popular Nollywood actress has been known as Belinda Effah for many years and she recently decided to be known by Grace-Charis Bassey.

She made the move known by changing the names on her social media profiles to reflect her new identification.

This popular actress used to be known as Faithia Balogun owing to her marriage to her colleague, Saidi Balogun. Many years later, their union hit the rocks and they was a tussle over her refusing to drop the ‘Balogun’ last name. She eventually did and adopted the use of ‘Williams’.

Fast-rising and talented Nigerian singer, Buju, decided to stop going by that name in 2022. The Feeling crooner announced on social media that he will start to go by the name BNXN (pronounced Benson).

According to reports, the singer changed his name because of another Jamaican artiste with the same name.

Talented singer, Cynthia Morgan, changed her name to Madrina after she fell out with Jude Okoye, her former record label boss.