Toyin Abraham, Kolawole Ajeyemi, AG Baby, Simi and 8 Other Nigerian Star Couples Who Work in the Same Industry, The Nigerian entertainment industry, just like those in other parts of the world has a lot of great talents who appear to find it hard to get love or go for people in their same line of work. 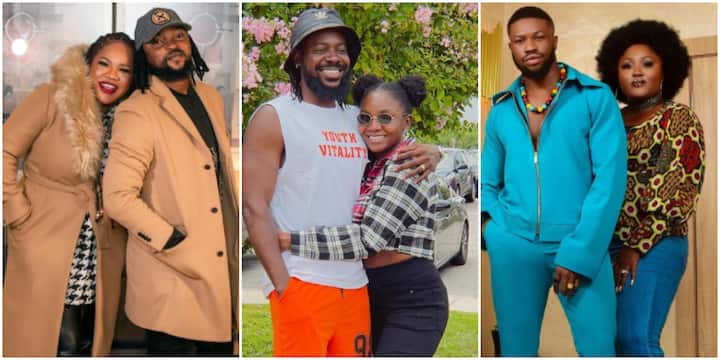 Many celebrities have been known to keep their relationships on a low profile and when they eventually start things with people not in the same industry as them, it sometimes doesn’t end well.

However, in the Nigerian entertainment scene, it has been noticed that some celebrities have remained within their circle to find love and it usually has a happy ending.

This could be due to both parties understanding the demands of the job and not finding faults with things that might upset other regular couples.

While there are peculiar cases of celebrity relationships hitting the rocks like actress Osas Ighodaro and Gbenro Ajibade, we has gathered a list of Nigerian stars who are in successful relationships with their celebrity colleagues.

These two talented musicians kept their relationship under wraps for a very long time until their big reveal in 2019 when they got married. They now have a cute daughter together. The music duo have also been known to treat fans to their romantic displays on stage and on social media.

These two Nollywood stars found love in each other’s arms and are now married with a cute son. Just recently, Suleiman revealed that it took him months to realize Ihuoma had feelings for him because he thought she was out of his league.

After a string of failed relationships that was publicized on social media, Toyin Abraham eventually found her happy ending with actor and filmmaker, Kolawole Ajeyemi. Their marriage has been hailed by a lot of fans.

Many fans were not aware that these Nollywood stars were an item until they got married in 2021. In a recent interview, Stan revealed that the high rate of celebrity breakups actually made him wonder if he was truly ready for marriage. He however added that he switched to God mode and followed His lead.

These Nollywood veteran couples are usually described by fans as having a very wholesome and beautiful marriage. They proved that love is for better and for worse especially after Joke Silva revealed that her husband was suffering with dementia of lewy bodies but she still showed him great love and support.

This is another Nollywood veteran couple that has continued to give fans goals. Their union has also stood the test of time.

These Nollywood sweethearts made many people believe in romance after they finally got married in December 2021. The news of their marriage came after fans had speculated for many years that they were an item but they maintained that they were just friends.

This is another Nigerian celebrity couple who made things official by getting married. Their union also serves as goals for fans. Just recently, Olatunji bragged about his wife and said men who do not marry women from Ekiti-Kwara like his wife are missing out.

These Nollywood stars is also another set of celebrity couples who found love with each other. In a recent interview, Seyi Edun revealed that she even pays her husband more when he happens to work on her production.

These veteran Nollywood stars’ marriage has stood the test of time despite it facing some controversies.

These are just a few of the Nigerian celebrity couples who found love with their fellow stars and have been able to make it work. Perhaps love is closer to people’s circles than they think.

Simple and classy: After 8 years of friendship, presenter weds lover