TV That Opens With Wings, Plush Interior, Expensive Cars and Other Features of Davido’s Banana Island Mansion, About two months ago, award-winning Nigerian singer, Davido bought himself a new house in Banana Island in Lagos and celebrated with a party. 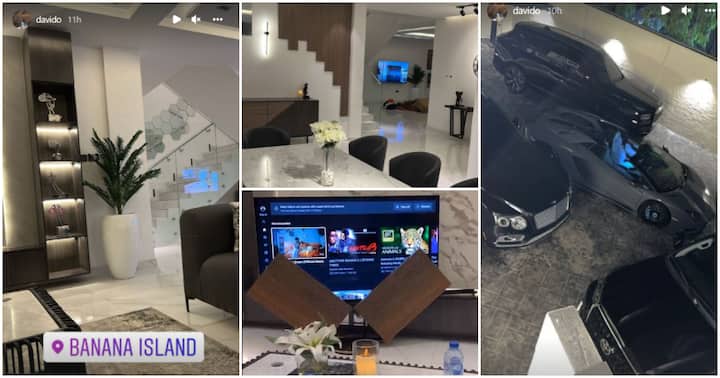 In recent posts, the singer decided to show off some of the interior and exterior parts of his mansion.

The inside of Davido’s Banana Island mansion is tastefully furnished with beautiful lights, soft furniture, artworks, decorative pieces, and some of his awards.

Despite the wealth and affluence, the singer chose to tow the minimalist lane with his furniture, painting, and layout.

A beautiful feature of Davido’s living room is his Bang and Olufsen one of a kind TV set. Rather than sit bare like a regular TV, the huge set comes up and the boards in front of it open up like wings.

Outside Davido’s home are beautiful trees, flowers, a pool, sit in area as well as his garage which boasts of expensive cars he acquired recently. 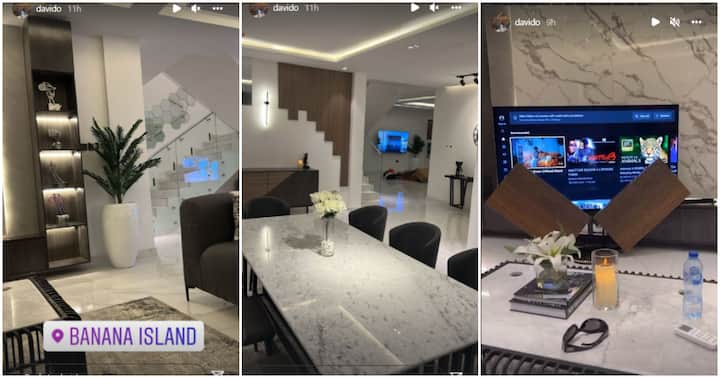 One quality a lot of Nigerians admire in award-winning singer Davido is the fact that he is very humble despite his status.

Popular filmmaker, Kunle Afolayan, shared a video of the moment he met the singer at the ongoing Dubai Expo.

In the video, Davido was with a group of people as Afolayan approached. Immediately the singer sighted him, he exclaimed in surprise before rushing to give him a hug.

Davido and Afolayan had a catch-up moment before they took photos. Nigerians could not help but commend Davido for his humility.