Actress Uche Nnanna Slams Celebs for Their Silence on Timaya’s Hit and Run Case but Wanting Justice for Bamise, Popular Nigerian actress, Uchenna Nnanna, has taken to social media to blast her fellow celebrity colleagues as she called out their double standards. 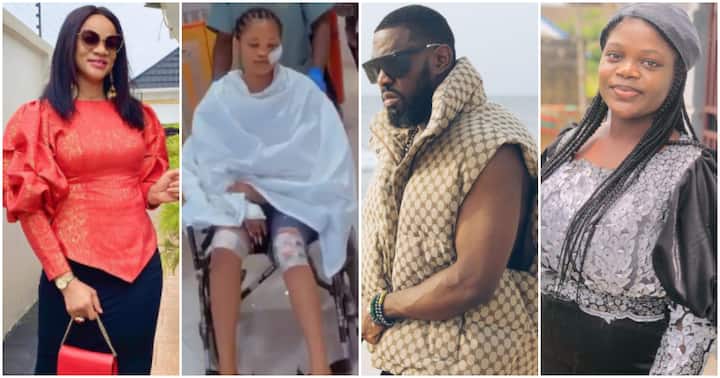 On her Instagram page, Uche noted how every Nigerian celebrity totally ignored and refused to speak about singer Timaya, who allegedly hit a lady with his car and zoomed off.

According to her, they all refused to speak up because the alleged offender was a popular person.

Uche then noted how the victim in the hit and run accident could have died if help had not gotten to her on time. The actress then called for justice for the woman involved.

Not stopping there, she also noted how every celebrity was asking for justice for Bamise, a young girl who was kidnapped by a BRT driver and later killed with body parts harvested.

She noted that people were asking for justice for Bamise because the offender was a BRT driver.

According to her, this was double standard on the part of these celebs. She then urged them to use their platforms to speak up.

“Ever since the story of a super star musician that hit a lady with his car and ran away broke out, not even one celebrity has said a word because the offender is also a celebrity. For God’s sake this lady would have died if help didn’t get to her on time. Thank God she is alive to tell her story by herself, but she is in pains. Let’s learn to call a spade a spade. We need justice for her.

Now every Celebrity is asking for justice for Bamise may be just because the offender here is a BRT driver.

It’s the double standards for me. Let’s use our status to call for equal rights especially when things are going wrong.”

Uche Nnanna’s bold move to speak on the Timaya issue was trailed by mixed reactions online. While many people praised her, others made excuses for the singer.

Read some comments below:

“You ain’t my fav for nothing, thanks for standing up for good.”

“I was even wondering why it’s taking Daddy freeze too long to set up the ring light. As for the curtain I know is there already.”

“She didn’t lie and some of the comments just proved her point. Keep the same energy regardless of the person’s status if you want to see change!!”

“The offender won’t just apologize, but must pay for what he did. Nobody is above the law.”

“As expected… Limited comments because it’s the truth … Yet, Timaya’s version of the story has more likes and views and probably most of them are from women. So Sad.”

Battle of the fashionistas: Toke Makinwa and Tacha spotted in same outfits