After 9-Months of Suffering: Uche Ogbodo Heartbroken As Daughter Utters First Words in Cute Video, Says ‘Papa’, Actress Uche Ogbodo has taken her fans on social media through her pregnancy, motherhood journey and she recently returned with yet another video showing a special moment. 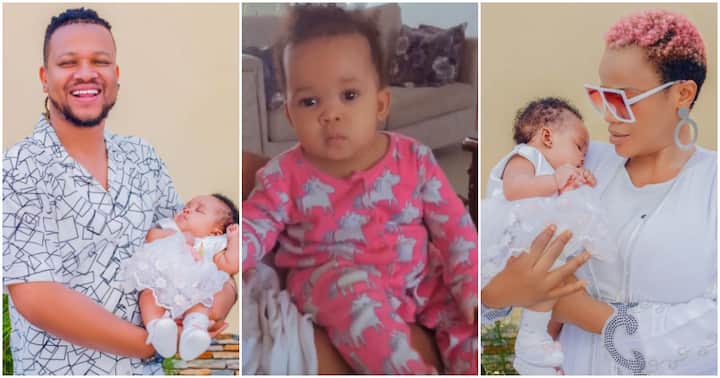 The video saw Ogbodo’s daughter with her husband and it captured the moment the little one managed to utter her first words.

The actress who seems to have been anticipating the moment for a long time was brokenhearted as her daughter had plans of her own.

With the assistance of Uche and her baby daddy, their daughter uttered her first words and it was ‘papa’ not mama.

Sharing the cute video on her page, the disappointed mother wrote:

“My Bunny Did me Dirty , Her first Word broke my Heart to pieces . after all my Suffer for 9months and another Nursing her for 9months this kinda Betrayal no Suit me atall #justiceformama.”

“Ewooo forgive on our behalf biko. Daddy must be doing something special, find out and match it .”

“Ah this pikin no try o. Ahba how would my Goddess feel now.”

“Aaawwwwwwwww my cutie cutie is so beautiful. She called who she resemble first as poking wey get plenty source. Biko don’t stresss my oyibo.”