Nigerian Dad Fights Son for Having Dread Haircut, Tries to Cut it off with Scissors in Video, Many React, For barbing dread, a Nigerian dad thought it necessary to teach his grown-up son a lesson not to be forgotten in a hurry. 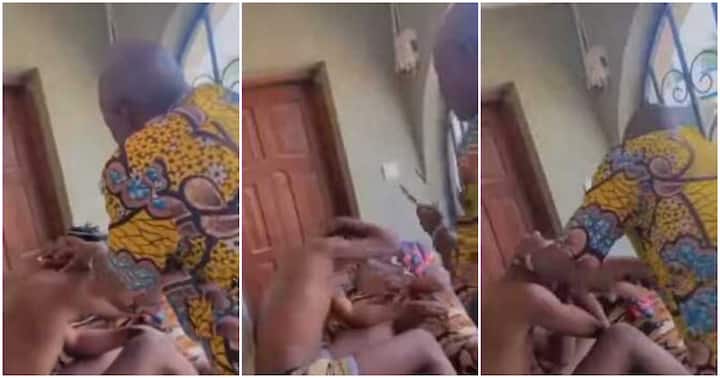 The Nigerian dad first confronted the young man, using cuss words on him for keeping a haircut he deems irresponsible for a promising young man.

He then took scissors and made a move to shave the haircut, but faced resistance from his son who kept dodging his father’s attempts respectfully.

In a short video reposted by Elufowora Eluyemi Lateef on Facebook, the father could be seen in a physical struggle with the young man.

At some points in the video, the dad smacked his son on the arm repeatedly as his attempt to shave the hair still wasn’t successful.

The boy’s mum could be heard in the background trying to wade into the situation.

“The first day I tried it my father beat the hell of of me that i almost lost one of my eyes that year i landed in OAUTHC. Since then i started barbing Scodo.”

“I have the same style on my head right now. Hairstyle has nothing to do with bad behavior. I have said this many times.”

“That was the way our parents trained us in those days. Even teachers would cut our nails and hair. But today’s parent will arrest them.”

“I remember when I went to cut my hair in a barber’s shop in 2002. I gave the barber a style which I admired during World Cup, and the barber did.

“I saw shege after I returned home in the evening.”

Uche Jombo reacts as many drag Genevieve, Omotola, others over Rita’s wedding