Married Nigerian Lady Scatters Her Husband’s Wedding Ceremony to his 2nd Wife, Video Stirs Reactions, A wedding ceremony was turned into a free-for-all fight after a man’s first wife pulled a stunt at the occasion. 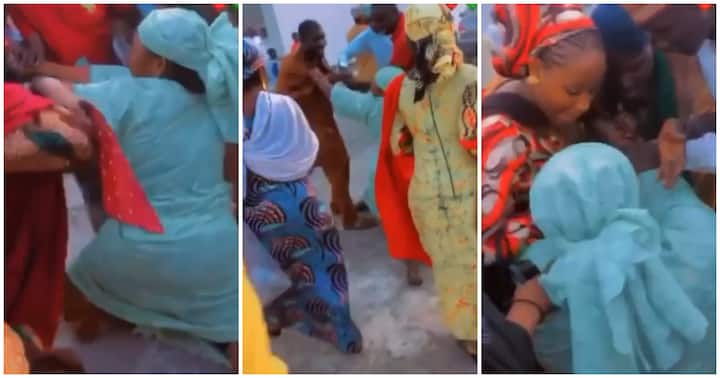 According to @northern_hibscuss who shared the development on Instagram, the incident happened in Minna, Niger state.

The genesis of the wedding fight

The news outlet narrated that the occasion was for a man and his second wife. It happened that the first wife had attempted to demonstrate ownership of the groom by taking a picture while seated on his lap.

Angered by her action, the groom – her husband – reportedly pushed her away. In the course of the fall from the push, the first wife hit the new bride and this infuriated the second wife’s relatives.

They were said to have pounced on the first wife in retaliation.

“How come almost all these polygamists keep honouring just half of the command of polygamy and that’s (marrying more than one wife) in both bible and quran metchew. Your first wife must never be maltreated or disrespected and a huge part of your properties must go to the children of your first wife. Unna no dey read the books unna belive in abi? Lols.”

“I am not supporting what the man did but didn’t the first wife know that, thats her culture that a man can marry more then one wife she should have known this before marrying the man in the first place but men though what are they looking for how can you marry two men culture or not it’s wrong see how the first wife disgraced herself.”

“Shebi dem say people from that part of the country with their religion like it wen their husband man take another wife Wetin come happen.”

What are the most powerful countries in the world 2022? Top 25 list