Video shows Toyota car that has toilet inside it, man explains how to use it

Company Builds Toilet Inside Expensive Toyota Car, Man Shows It Off in Viral Video, Many React, A company has built a toilet and bathroom into his SUV vehicle. With this car, one does not need to worry about the restroom when travelling long distances. 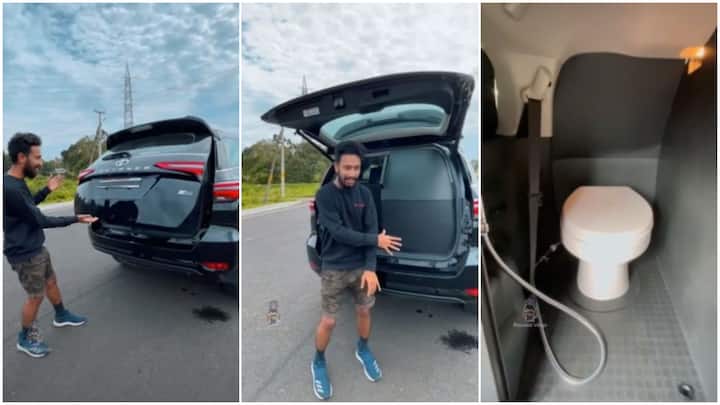 CarToq reports that the vehicle solved a major need by installing the toilet inside the Toyota Fortrunner by himself.

It has tank for water

In a video posted by Revokid Vlogs, the interior of the car and where the toilet is installed were shown. It is located at a side in the back of the car.

It is made in such a war that the toilet is perfectly in the third row of the vehicle. There is also an installed tank that carries water.

One important thing to note is that the video never showed how the waste is going to disposed. CarToq said such modifications can cost Rs 70,000.

“Seatbelt is very useful for the toilet seat so that you don’t poop anywhere else by mistake.”

“Every car company should think about in built toilet this facility helps to senior citizens.”

“The toilet even has a seatbelt so you can buckle up while you let it drop.”

“It would have been great if you could add a washing machine too.”

Take care of your number 1: Man buys Benz for his mum, makes her emotional