We don’t deserve them: Dog thinks little girl is drowning, pulls her out in lovely video

We Don’t Deserve Them: Lovely Moment Dog Pulled Little Girl Out of Sea, ‘Rescues’ Her From Drowning, A video reshared by Daily Mail has shown the moment a big dog demonstrated that it is looking out for a kid while they were both inside water. 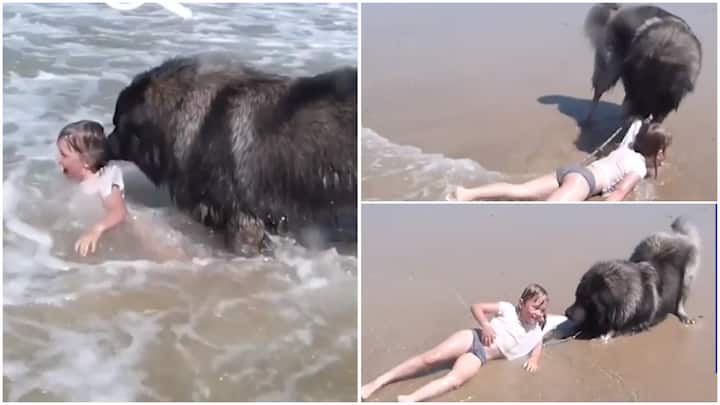 Noticing the sea waves kept hitting the girl, the animal pulled the kid and attempted a ‘rescue’. The canine beauty thought the child was in danger.

The kid who found the act funny could not stop laughing while the dog was at it. The animal never stopped until it successfully dragged the kid up to safety at the shore.

Many people who reacted to the video said that human beings do not sometimes deserve the pure love of dogs.

“Awwwwww, we humans don’t deserve the kindness of some animals.”

“Dogs are our second guardian angels.”

“He’s adorable and so loving to her!”

“It’s a Newfoundland dog. Best friend anyone could ever have.”

“My jack Russell mix used to guard the cement stairwell outside so my 4 year old didn’t fall down it. He would stand in front of it and bark at my son like, you are not going down there! Dogs are smarter than we think.”