Wetin she go do for up? Reactions as schoolgirl stands on fence to see Bukunmi

The Love Is So Real: Fans Gush As Schoolgirl Stands on High Fence Just to See Bukunmi Oluwasina, Nollywood actress Bukunmi Oluwasina has expressed shock over the action of one of her female fans. 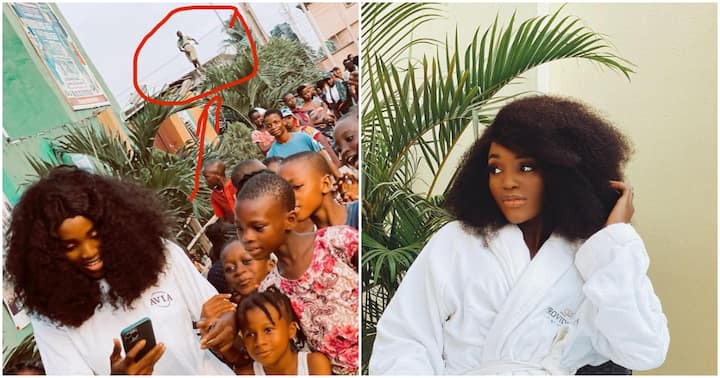 Bukunmi, who shared a photo taken at a movie location, was surprised to see a young girl in school uniform standing on the fence just to catch a glimpse of her.

The girl was standing on a high fence with electric wire behind her.

Sharing the photo on social media, the actress wrote,

“Just going through my phone and saw one of the pictures I took on the previous set I was, And I’m seeing something Awkward. Please let’s check together. Maybe it’s my eyes. What is that girl in uniform doing up there??? No be electric wire she dey rest on so??? ‍♀️ Abi na my eye. E gbami.‍♀️.”

Nigerians have since taken to the actress comment section to react,  some of the reactions, see them below:

“Momma, you remember one Bible story. When Jesus was passing and everyone was trying to touch him and one short man went on top of a tree… Naso.”

“I was thinking twas a statue till I zoomed it.”

“Wetin she go do for up bayi….but the wire isn’t close to her it seems that way because she’s up and we are looking at her from afar.”

My story can’t be complete without you: D’banj says as he embraces JJC Nigerian music stars JJC Skillz and D’banj have left many Nigerians gushin