Kanayo O. Kanayo: Burna Boy Tells BNXN Source of Wealth As He Buys New Ferrari After Crashing Old One, Grammy award-winning singer Burna Boy recently splurged millions on acquiring a new Ferrari, a feat his colleague BNXN (formerly Buju) could not get over. 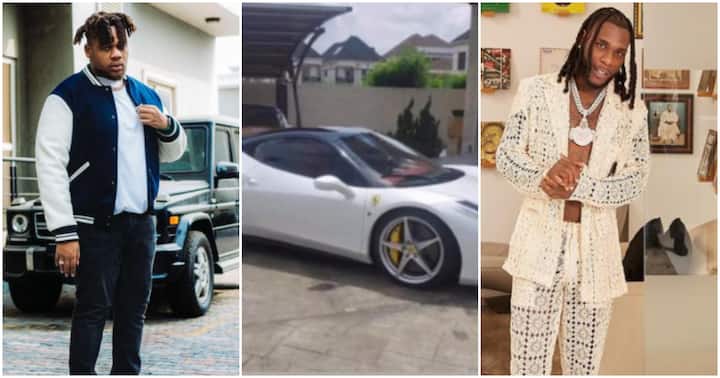 In a video sighted online, BNXN was seen with the African giant questioning him on his source of wealth as they examined the new car.

BNXN urged Burna to open up a school and teach how it is done because he’s pretty sure the Odogwu was not into money rituals.

Replying to the ritual part, Burna Boy decided to mention the name of popular veteran actor Kanayo O. Kanayo who is notorious for his money ritual roles in movies.

Nigerians react to the video`

“I will love to attend the school.. na only me never buy car for this Lagos.”

“Lol something OBO can do with ease.”

“He crashed his Ferrari and got another one meaning what? Was he not paid for the crashed Ferrari by the insurance,Abi what all this buying another Ferrari all about. Misplaced priorities. Daddy Buntyn lol.”

Look at the beautiful kids we made: Bam Bam marks Teddy A’s birthday in style