White Man Recreates Photo He Took in Maiduguri 40 Years Ago, Adorable Images Go Viral as Many are Wowed

White Man Recreates Photo He Took in Maiduguri 40 Years Ago, Adorable Images Go Viral as Many are Wowed,

A white man identified as Swen Abel has recreated a photo he took in Maiduguri forty years ago in which he could be seen clinging to a tree. 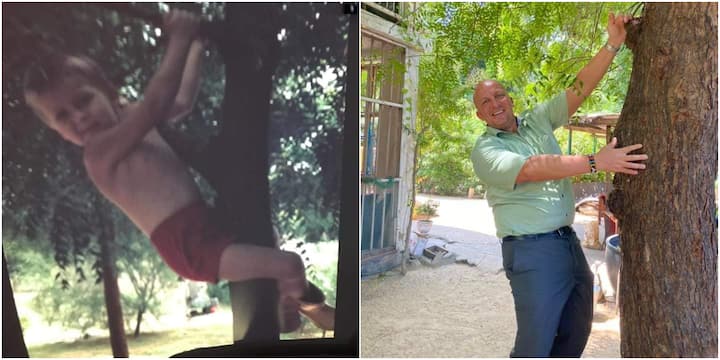 Little Swen, who only wore knickers, grabbed a branch of the tree and wrapped his legs around the trunk.

In the new photo Swen took with the same tree, he clung to the latter and smiled for the camera.

The photos were shared on Facebook by Rahma Monguno, who said Swen and his family used to live in the house his father built, adding that the white man was a young boy at the time.

Describing Thursday, October 7, as the most fascinating day of his life due to Swen’s visit, Rahma wrote:

“He clung onto the same tree he did over fourty years ago, with the same agility I might add. To add icing to this cake, Swen called his Father across the ocean, and we chatted for long, as he had the kindest words to say about our late Parents, and I told him, his legacy lives on, in the numerous trees he planted whilst a tennant, including the one with the ever so thoughtful Son.”

Rahma expressed gratitude to Swen for his visit and prayed good things will always be his portion.

“Wow I love the pictures showing past and present.”

“Oh what a fascinating reunion this is nostalgically pleasing.”

“Happy reunion! May the soul of Dad continue to rest in peace, ameen.”

“How both have grown. The tree and the chap.”

She Has Cried Well: Reactions as Tega Makes First Appearance After Deleting Instagram…