Wife clears husband’s N1.3m debt, he carries her up in video, sheds tears of joy

Husband Sheds Hot Tears When He Sees Wife Has Paid Off His N1.3m Debt, Videos Stir Emotional Reactions, A Nigerian woman has gone online to make a series of videos to show the moment she informed her husband his debt has been cleared. 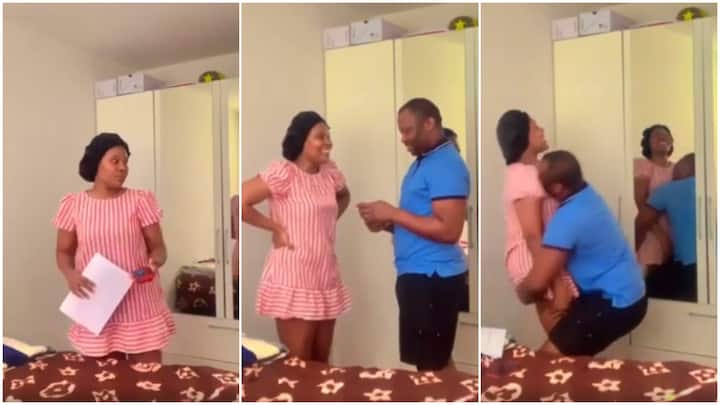 She said she did not clear his debt as a way to be proud that she has money but to give him a big relief.

The woman said that the husband borrowed the money from the bank about three years ago because he wanted to give his family comfort in the home.

According to the wife, the man has been paying the money monthly. The woman stated that when she moved in with him abroad, she thought she was going to start work immediately.

She added that she has been hoping to be blessed so that she can clear the debt for him. In her words:

“I’ve been saving because I want to put smiles on my husband’s face. I want to see him relieved from this stress.”

After speaking to her audience, she called her husband in and showed him what he has done. When the man saw the blessing, he carried her up that both of them fell on the floor.

The man sat on the floor and started singing praise to God in the Igbo language in tears. It was such an emotional thing to watch.

The second part is below:

“You can never understand the joy of a man when you take the wheel and sometimes just do it with joy. Men are not robots.”

“Awwwwww. This is in every way beautiful.”

“Aww it’s one thing for a woman to do something for a man it’s another thing for the man to appreciate it and SHOW IT. That’s a good man.”

“I really feel for the man. His joy is too real…a grown man crying.”

“Tears rolled down my chin….Love is amazing.”