A Nigerian man called Azeez has taken sweet Nigerian jollof rice to the streets of London, putting the rare taste on the lips of many Oyinbo people. 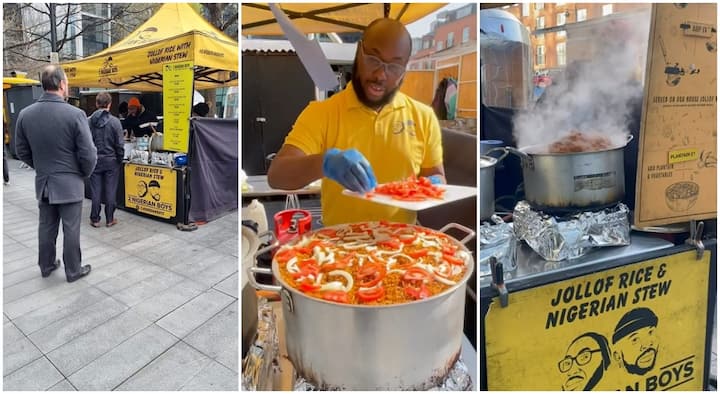 In a photo shared on Twitter by @IamOlajideAwe, some Oyinbo people could be seen as they lined up to buy food from the restaurant.

We were two when we started

In a short chat with Legit.ng reporter, Azeez said he started the restaurant with one other person, but that he now runs it alone.

“I’m from Lagos, Surulere. We live in London so we decided to bring food to the city. We were two when we started but now, I’m running myself.”

When @IamOlajideAwe shared the tweet, it generated interest from Nigerians who commended the hustling spirit of the man.

If you find yourself in London around Spitalfields market do well to support our own abeg.. pic.twitter.com/SFL8sws3Bt

See some of what they are saying below:

“I had to go follow you. People who pray for others to strive genuinely, mehn that’s something even if them no like am or retweet, we see you.”

“Nice one. I hope we have the same courage to sell food in Nigeria as young men. Ameen.”

“Oyinbo queuing up for Jollof rice?”

“Nice one. This is hustling and working hard. Keep it up guys. More doors will open for growth.”