A South African man went viral with a video of him proposing to his girlfriend. However, the venue was not the traditional scene of a proposal. 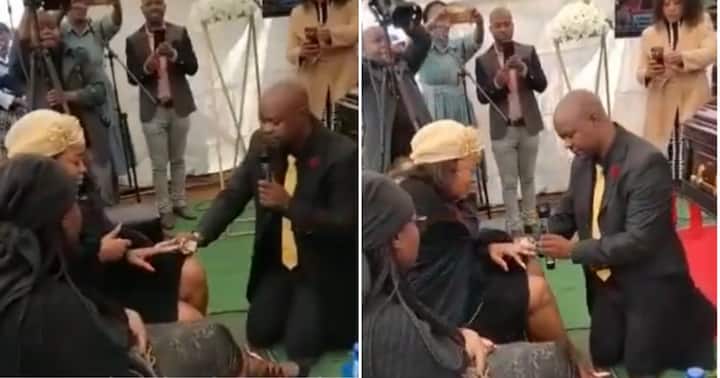 Instead of a romantic setting or special place that vibes with a heartfelt proposal, the man chose to bend the knee at his girlfriend’s father’s funeral.

The video has since gone viral with people asking a lot of questions about whether the funeral was the right time and place for the man to pop the questions.

Mzansi was left with a lot of questions after the video ended before the girl gives the man an answer to his question.

Would you say Yes?? pic.twitter.com/4KtolVDfuV

“I have mixed emotions on this one, on one hand, maybe he thought this will make her feel comforted on the other, she is mourning and not in her senses (vulnerable) and needs the space to grieve

“Same here like the timing is so off. Switching of moods from 0 to 100 won’t work here.”

“Public proposals put women under pressure already but this level of pressure is even worse. At her lowest you still want her to make life time decision but as long as they are happy I guess.

Kim K Admits to Panicking Without Kanye as Her Stylist, Reveals He Compared Her Look to Cartoon Character