Big Disrespect to US Currency: Fans Blast Nancy Isime As She Uses Shredded 20 Dollar Bills to Fix Her Nails, Nigerian TV personality, Nancy Isime’s new ‘dollar’ nails has earned her series of bashing on social media after photos and videos made the rounds. 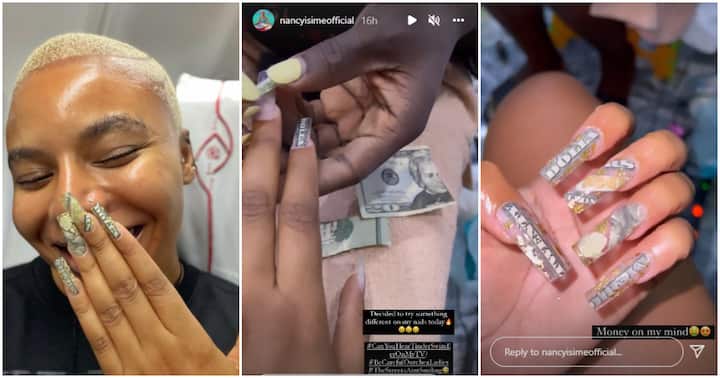 Nancy shared clips and photos of her new nails on her Instagram page as she showed how it was done.

In some videos, it was noticed that what appeared to be a 20 dollar bill was shredded into pieces to be attached to the TV girl’s artificial nails.

According to Nancy, she had decided to try something different with her nails. She also added that money is on her mind.

See another photo of Nancy flaunting her dollar nails below:

Nancy’s new nails however did not draw positive reactions as expected. A number of people criticised the media personality and accused her of disrespecting the dollar note. A few others however noted that the dollar bill could have been a fake one.

“Thought she was smarter than this.”

“They can arrest you for this in the states o wt*f .”

“I hope she knows she can be arrested for this it’s illegal to do this to the US currency, I hope it’s fake sha cos if they decide to take this up, it won’t even be funny.”

“Omo make American govt no see this one o, especially if you visit their country.”

She suffered for us: Kids join hands, build their mum big house as birthday gift