Is This Not Unhealthy? Many React to Video of Man Spraying Naira on Newborn Baby at Hospital After Delivery

A young Nigerian man could not just keep his joy at his seeing his newborn for the first time after the baby was given birth to. 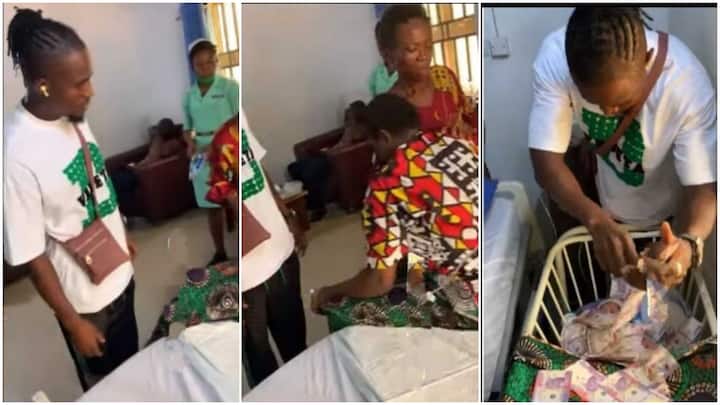 In a clip reshared by @gossipmilltv, the man initially stood in surprise before he moved to the cradle where the baby was.

When he got to the spot, he dipped his hands in his bag, brought wads of naira notes out and started spraying the kid.

People who were around found his act so cute as they whipped out their cameras to film him . As he sprayed the money, he made sure the notes were not covering the baby’s face.

As at the time of writing this report, the video has gathered over 9,000 comments with more than 90,000 likes.

“Congrats but this is unhealthy sha.”

“Spray your wife instead, cus she pushes that beauty out for u both.”

“Abeg no give d baby infection – spray the mother.”

“All I see is germs around the baby.”

“Congratulations. But the money is supposed to be sprayed on the wife. She’s in so much pain, she deserves it.”

“Aza man your wife need the money sho gbo, she is even in pains.”

“Na the mother you need spray that money! If she tells you where she’s coming from ehh! Na between she,life and death!”

“Pray for ur child first ode u carry money Mtcheww this generation sha.”

“What’s Awww about dis…congratulation oo, but this is unhealthy he walked passed the lady who pushed the baby out…appreciate her first before seeing ur child.”