Joy as Nigerian Lady who Almost Committed Suicide in UK School Graduates in Flying Colour, Lands Big Job, A young lady has been celebrated on social media for achieving academic success in her UK school despite her strong challenges. 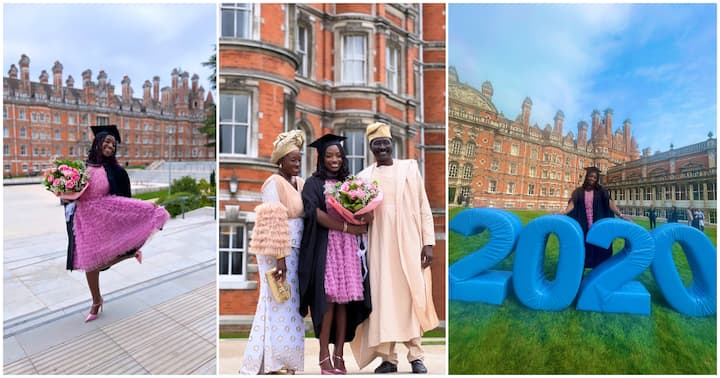 The Nigerian lady had announced graduating with a second-class upper degree on Twitter while sharing photos from her graduation ceremony.

She attempted suicide in school

The lady who had a long battle with a mental health condition called bipolar disorder was declared unable to ever recover by psychiatrists and that her future was ruined.

The fresh graduate added that she had one time attempted suicide but was saved by a friend named Siamara Goddard who reported it to the school authorities and this helped her get the needed professional help.

“She doesn’t have Twitter but Siamara Goddard literally saved my life in boarding school.

“I had a su*cide attempt. She reported it to the school authorities and that was the year I finally got all the professional help I had needed for so long.

The lady also recalled how she almost dropped out of school in her final year in the year 2019 but all that is in the past.

The Nigerian revealed she has secured a job with the largest UK publisher in Canary Wharf.

2015…A-Levels, I had my first manic episode & got my bipolar diagnosis. I was sectioned and the racist NHS psychiatrist told my parents I would NEVER recover and my future was ruined.

I’m graduating with a 2:1 today & working for the UK’s largest Publisher in Canary Wharf 💕 pic.twitter.com/BjjvUQavRI

“There is a worse case scenario for most illnesses and it is doctor’s duty to educate the patient about such possibilities which may not necessarily come to pass.”

“I’m glad you were able to get diagnosed and get the help you need and carry on with your life with that help!

“I am so so so proud of you! You are such a blessing to this world and your truth is going to help so many others! Congrats boo.”

“Congratulations and Thank God for your success.

“TBH it’s not nice to see doctors being ridiculed or spoken by of for explaining the tiny details of an illness to their patient.”

Kids use mum’s phone to order, pay for big TV online, she punishes them in video