Young Nigerian man takes photos of old man, sells them for over N1m as crypto

Nigerian Man Takes Photos of Old Man, Sells Them for Over N1m As NFT, Promises to Give Him 50%, Many React, A young Nigerian photographer, Adisa Olashile, has shown one of the many possibilities of blockchain and cryptocurrency. 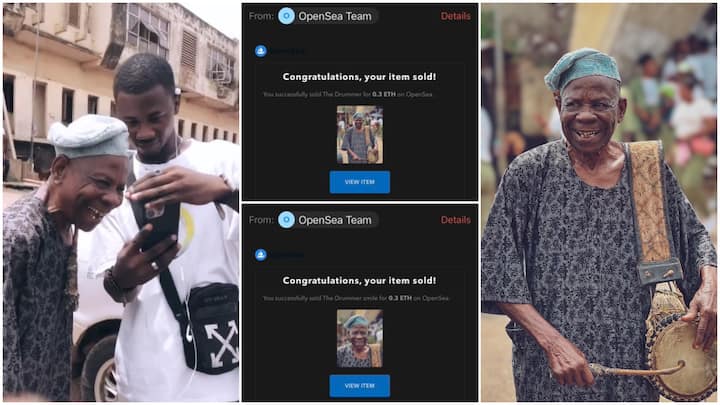 In an earlier tweet on Friday, April 1, Adisa said he took photos of an old drummer who he usually saw on his way to CDS.

How he turned them into money

On Saturday, April 2, the brilliant photographer came online and revealed that he minted same photographs as Non-Fungible Token (NFT) on OpenSea and sold them for 0.3 Ethereum each.

Adisa said that 50% of the money he made from the mints will be going to the man. Please note that the price of cryto is volatile and the price captures could change anytime.

Minted baba’s pictures as nft and got them sold immediately. Inshallahu 50% is going to him. Ramadan Kareem 🌙 https://t.co/6eNMWuDu4o pic.twitter.com/wUTS8ZQPzY

“I swear a laptop is hindering me from alot of opportunities I ought to have learned. God pls send your helper to bless me with one either used or new pls.”

“You don’t necessarily need a laptop to start, you use an iphone, you already have what you need.”

“Wow, this is great…please how can I sell stuffs on NFT too?”

“Wait.. Comrade abeg na iPhone you use snap this picture .. Because e com b like say i no dai use my phone do anything.”

“Looks like I may have to learn this NFT thing o.”