Youth Day: 5 Inspiring Stories of Graduates Who Filled Mzansi With Pride and Reminded People of Their Power, On Youth Day we decided to take a look at just five of the incredible graduates whose stories we have been able to share with the nation. These stories have inspired people to reach for their dreams, reminding them that their circumstances do not define them. 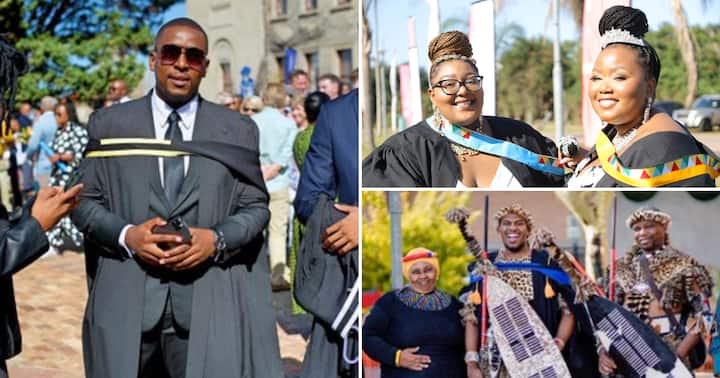 The youth of Mzansi fought for freedom – freedom to exist, learn, grow and soar – and that is exactly what they are now doing. Changing the course of history by doing things those before them never could.

Take a look at these five inspiring graduates and their touching stories:

Social media influencer, Kgaugelo KC Mokholwane took to Twitter to congratulate his friend and the pictures had Mzansi feeling some type of way.

The young man received a lot of attention not only for his accomplishment but for his looks too. LOL, the women of Mzansi are thirsty!

2. Mzansi babe beams as she breaks “generational curse” by becoming first in her family to graduate varsity

What an inspiration! The beautiful Lufuno Ruby Ratshedana took to LinkedIn with two stunning snaps of herself on graduation day. She did the thing and then some.

This stunner did not only bag a degree, she got honoured for her hard work with multiple award nominations and a bunch of wins.

“Walking out of the University of the Witwatersrand as a two times Golden Key nominee, postgraduate merit recipient and holding nine certificates of first-class awards!!”

A young man decided to share his special moment with those who were unable to have the opportunities he has – his ancestors.

Twitter user @sfiso_hlongwa shared touching pictures from his graduation, showing off his traditional attire with great pride. What a thoughtful gesture.

From the valleys and hills of Umbumbulu to the world. This outfit was to honour those before me who wished to have this opportunity but unfortunately were not privileged. On 25 April 2022, they realised their dream through me. @go2uj pic.twitter.com/mggwQHlFAh

Age is but a number, baby! 21-year-old Decent Mkhombo became South Africa’s youngest qualified doctor this week after he graduated with his medical degree from the University of Limpopo

The bright young man showed academic excellence from a young age, so much so that he skipped some grades and was allowed to enrol in medical school at 15.

Decent was among 47 young medical doctors who took their oaths at the university after completing their degrees on Wednesday, 15 December.

5. Sisters graduate together from UKZN as they follow in the footsteps of their academic parents, Mzansi inspired

Sisters and best friends, Sibusisiwe (24) and Dintle (23) Masondo, were overjoyed to be graduating together from the University of KwaZulu-Natal’s (UKZN) Westville campus.

The university revealed that once Dintle joined UKZN the following year, the sisters supported each other, travelling to campus together and studying side-by-side.

“Thank you for your womb”: Somizi Mhlongo makes peace with his baby mama Palesa

3’s a Blessing: Mother gives birth to 3 babies in a year, they’re not triplets